Self-Soothing Behaviors Often Have A Message 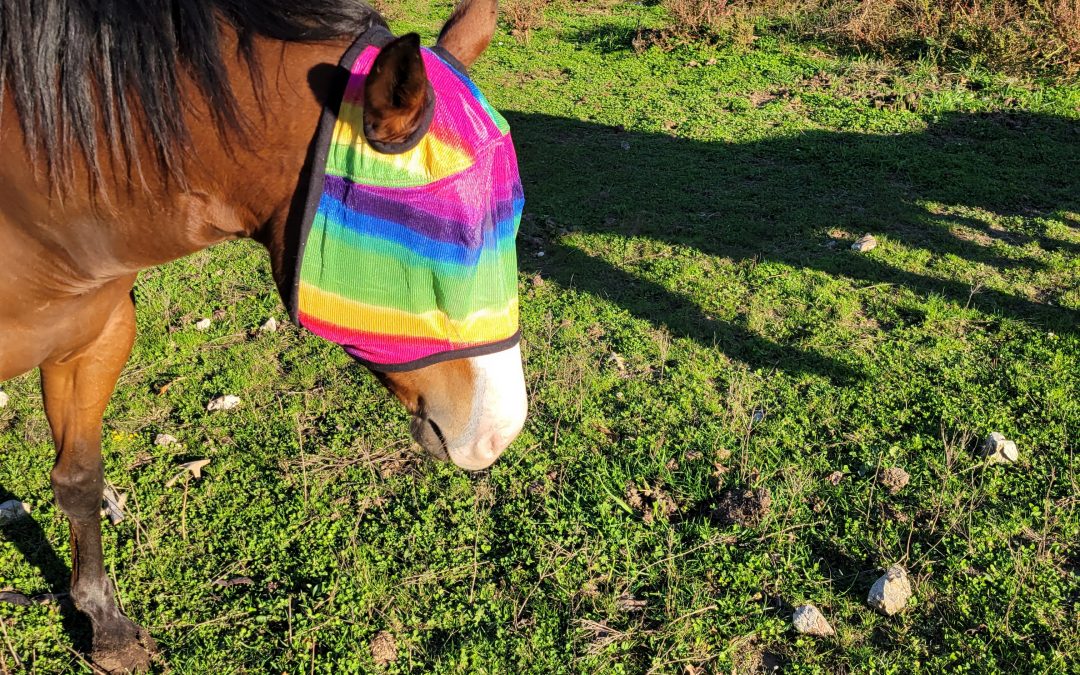 whAuthor’s note: This may be a rather long blog, but I hope you read it through as it talks about stimming as a natural behavior across species and grants some insights. Horses are a special interest of mine, so I love talking about the sacred herd. The image above is Firefly, the subject of this blog, in her rainbow fly mask over her eyes. Yes, she can see through it, and it doesn’t bother her. In fact, she’s the only horse in the herd to keep one on for more than a few days, something which I think ties neatly into the subject of this blog.

The Merriam-Webster dictionary defines stimming as a self-stimulatory behavior that is marked by a repetitive action or movement of the body (such as repeatedly tapping on objects or the ears, snapping the fingers, blinking the eyes, rocking from side to side, or grunting) and is typically associated with certain conditions (such as autism spectrum disorder), In humans, to use the equestrian term, it’s considered a vice, a bad habit, something that doesn’t fit in with polite society. And just as the human world uses the very harmful ABA (Applied Behavior Analysis) to try and remove this behavior, in the horse world there are numerous measures including special “collars” and environmental modifications (such as removing exposed wooden ledges from stalls) to stop the behavior. There’s also advice such as turning the horse out more rather than leaving it in a confined stall, which is why as both an equestrian and an autistic, I see equine vices to be possibly very similar to stimming. Both are attempts by the individual to soothe sensory overload (or sensory deprivation) and to handle an unahppy nervous system.

Why am I mentioning this? Because I have a horse that stims. She likes to wind suck, or crib. She puts her front teeth into a wooden surface and pulls back making a “belching” noise. She’s turned out 24/7, has been her entire life, is in a stable herd with both her parents, gets plenty of food, exercise, fresh air, and I think most neurodivergent people here will hear the echo of the allistic parent with a neurodivergent child. I am giving her the best horse life, why is she doing this?

Now in horses it’s important to monitor this behavior, and at times stop it, because it can cause gastrointestinal distress and other health issues. So I monitor my horse to ensure that isn’t the case, and it hasn’t been.

However, I’ve also noticed something interesting. Since making a very small change in her routine, I’ve noticed less of this behavior. I consider the horse’s wind sucking to be stimming behavior. It’s been proven that this behavior releases dopamine (a feel good chemical) in horses’ brains, and with turn out in a large pasture with other horses, and engaging in the herd dynamic, there’s very little stress pressure on her. She’s not ridden, not kept in a stall, not trailered to and fro. She’s fed twice a day, plus free choice grazing or hay depending on the season, so she’s not in need, and with three water troughs, there’s plenty of fresh water, topped off daily for her. She seems to do this because it fills a need in her life. One that I may never fully understand.

She also has the laid-back, do-whatever-you-want attitude of her sire (who was that way before he was gelded). Pick up her feet? Sure. Brush her. Sure. Kisses on the nose. Right on! So she doesn’t have the nervous or anxious personality that many horses with vices have. She’s not broke to ride, but I can lean across her back, even sit on her when she’s resting (gently with my weight braced on my feet, not her back) without any problems. She’s as zen as a horse can be.

But I believe she stims to release sensory stress. Perhaps it’s a way to get away from the herd dynamics. Her mother (and her grandmother) are both the lead mares, with her grandmother taking over that role when she came to live with us a few years ago. Her sire is a goofy gelding who often loves to play and can be a bit of a pest. Perhaps her stimming is her “me” time. It’s her alone time when the other horses leave her alone and she can chill and destress from that. (She’s in the middle of the herd, deferred two by the two lower ranking horses, even though she allows them to graze close to her and shows no signs of not liking their company.)

Why am I telling you this? Because I noticed over the last few weeks the behavior has decreased. The only change? Her mom receives some soaked alfalfa pellets at lunch time, and I’ve started allowing her to join her mother for “lunch”. Neither horse needs the extra calories, per se. But, as her mother is my heart horse (and as of this writing will be 23 in August), she gets extra love and attention. And of course, as my heart horse’s “baby” (though she’s 8 this year) she gets extra love too. So they receive alfalfa pellets, soaked on these hot days for extra hydration.

Alfalfa pellets also serve another purpose. They help buffer the stomach against ulcers and upset because of the natural calcium level in alfalfa. So not only is this horse getting some quiet time with her mother away from the other horses, but she’s also receiving good nutrition that helps against any stress-induced stomach upsets.

As mentioned in the paragraph starting this blog, this horse also is the only horse not to rub off her fly mask. I check it to make sure it isn’t rubbing against her skin, and remove it and put it back on about every other day, but she leaves the fly mask on. The purpose if a fly mask is to protect against flies landing on their face and around the eyes, something that’s rather annoying even if you’re not a horse.

What this tells me is that in spite of my very low stress environment, this horse is sensitive to sensory stimuli. It also masks, and doesn’t show that through an anxious environment. Now before you think I’m projecting, I have extensive studies in equine behavior, care and keeping. I’ve looked at this logically, and since she can’t speak in English to tell me what she needs, I can only make scientific, educated guesses based on behaviors. In other words, create a hypothesis, test it, and see if it holds up. So far, this one has.

Certainly trying to change this behavior in the horse would cause more stress, and trying to change the behavior in humans causes stress, too. Instead, I propose we look at stimming as behavior which sends a message. It says “hey, something isn’t right here” and “let’s see what we can do to make things better”. When we look at stimming in that way, it becomes like the check engine light in your car. It comes on, and while the situation may be easily fixed (tighten your gas cap), it also could signal something that needs serious attention and resolution.

I also think it goes without saying, but I’ll say it here, that it is OKAY and ACCEPTABLE to stim when necessary. Stimming often sends a message of things which could be fixed or ways our lives could be enhanced. If the world is too much, stimming is a way to say so. And it’s something which should be accepted and listened to because it helps us remain connected to ourselves and in tune with the world around us, even if the dial needs to be turned of “off” sometimes.